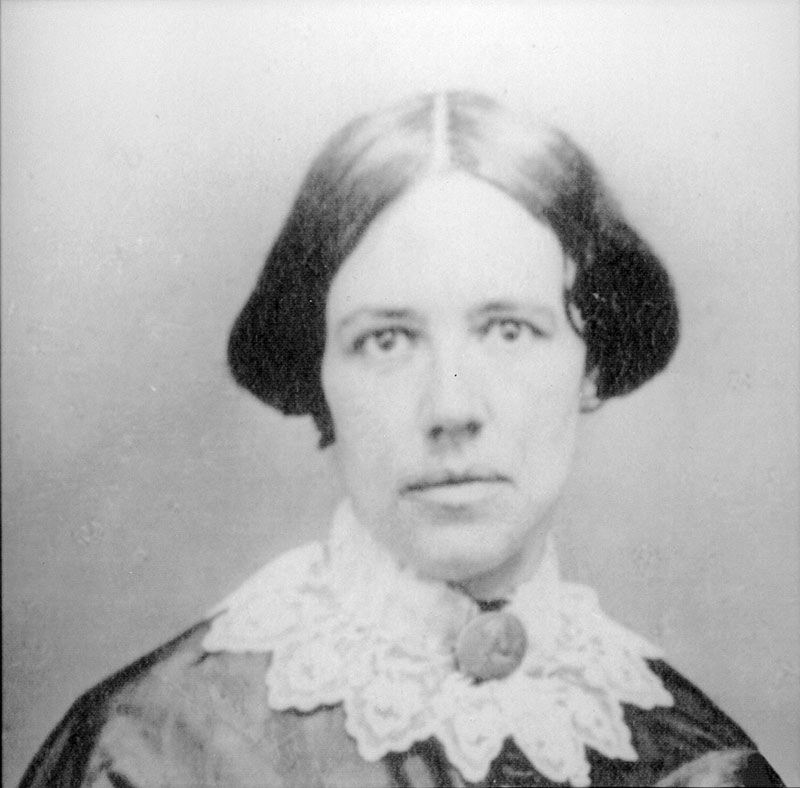 Throughout its long history, Nantucket has produced no dearth of strong, influential women. The Nantucket Atheneum, in a slightly shorter time-span, has had the good fortune to showcase the talents and inspiring words of many such women. Below are the stories of the abolitionists, suffragettes, and one astronomer who graced the Great Hall with their presence and touched the Nantucket community.

Celebrated astronomer, Maria Mitchell, began work as the Atheneum’s first librarian in 1836. Her mother, Lydia, had been the librarian for two of the island’s subscription libraries and Maria followed in her footsteps. Though untrained in cataloging and other skills required of librarianship, Mitchell’s patience and organization, honed by years of taking notes on the movement of the cosmos, made her well-suited to the librarian position.

The job was also well-suited to the young astronomer’s needs. During its nascent years the Atheneum was only open for a couple of hours a day, giving Mitchell ample time for studying the stars and poring through the library’s resources. Her brother, Henry, would later say “she in essence acquired a college education through the books at the Atheneum, where she taught herself mathematics, including calculus, and the most advanced astronomy of her day[1]”

Over her twenty-year tenure as the Atheneum’s librarian, Mitchell cataloged thousands of books and devoted herself to bringing materials into the library that would engender intellectual growth in her patron population. In her journal from 1855, she writes, “So I steadily advocate in purchasing books for the Atheneum, the lifting of the people. ‘Let us buy, not such books as the people want, but books just above their wants, and they will reach up to take what is put out for them[2].’”

Maria’s discovery of a comet in October 1, 1847 changed the way that both she and the Atheneum were perceived. Her discovery, which came only a few days before European astronomers noticed the same celestial body hurtling through space, earned her a gold medal from King Frederic VI of Denmark , fame as America’s first female astronomer, press in numerous well-respected science journals, entrance into the American Academy of Arts and Sciences, and part-time work for the Nautical Almanac. Her subsequent celebrity attracted tourists, academics, and flatterers to the Atheneum.

Mitchell was embarrassed by the attention of those she admired and found those whom admired her to be tiresome. In 1850 she noted, “My visitors….have been of the average sort. Four women have been delighted to make my acquaintance-three men have tho’t [sic] themselves in the presence of a superior being-one man offered me 25 cts because I reached him the key of the museum-one woman has opened correspondence with me and several have told me that they know friends of mine…I have become hardened to all-neither compliment nor quarter dollar rouses any emotion[3].”

She came to dread these visits, which she found exhausting and left her with little time for her Atheneum duties. She persevered, however, for several more years by hiring a handful of young Nantucket youths to help with library work[4].  She left her position in 1856, while her mother was in ill-health and a couple months before she embarked on a cross country trip. Of her departure, Atheneum trustee E. G. Kelley lamented ‘however meritorious her successor may be, [we] apprehend that the institution has sustained a serious loss in the withdrawal of Miss Mitchell[5].’

As a parting gift, the Atheneum’s trustees told Mitchell that she could take with her whatever science books she desired. After traveling much of the United States and Europe, Maria Mitchell became Vassar College’s first female professor and director of the observatory. Upon her death, in 1891, then-president of Vassar College, Dr. Taylor, reflected “If I were to select for comment the most striking trait of her character, I should name her genuineness. There was no false note in Maria Mitchell’s thinking or utterance…It was this perfect genuineness which gave her the strong hold she had on the admiration and affection of her students.[6]”

A brief blurb in an 1853 edition of The Inquirer notes that famed suffragist, Lucy Stone, gave two speeches on women’s rights to the residents of Nantucket. The first lecture was described as “well-spoken of,” the second not described at all. The reporter failed to elaborate on the topics she spoke of, but noted that she wore ‘Bloomer costume[7].’

Forty years later Anna Gardner remembered “the pleasure” of listening to Stone’s lectures to a “large and intelligent” Atheneum audience. She noted that Nantucket had been one of the first places that Ms. Stone visited after entering the lecture field. Passionate about abolitionism as well as women’s issues, Stone helped to set up the first women’s rights convention in Worcester in 1850, aided in organizing the American Women Suffrage Organization, returned to the Athenum to speak at the island’s 1886 Woman Suffrage Convention, and, with her husband, supported and wrote for Women’s Journal until her death in 1893[8].

Anna Gardner was just six years old when fugitive slave, Arthur Cooper, and his family, took refuge in her parents’ attic while hiding from a bounty hunter. According to Gardner, the great fright of the family “was too indelibly impressed upon the mind of a child ever to be forgotten.” That experience and the guidance of her radical parents set her on a path to abolitionist activism. By her early twenties Gardner had taken a teaching position at the African School, become the second Nantucketer to subscribe to William Lloyd Garrison’s abolitionist paper, The Liberator, and taken office as secretary in the Nantucket Anti-Slavery Society.

Gardner gave up teaching at the African School in 1840 soon after her star pupil, Eunice Ross, was denied entrance to the newly constructed public schools. She focused her energies on her role as secretary to the Anti-Slavery Society and is credited with organizing the three Anti-Slavery Conventions held at the Atheneum in 1841, 1842, and 1843. These conventions, which are described at length on the Atheneum’s abolitionist history page, put Nantucket on the map as a bastion of anti-slavery sentiment.

Over the next two decades Gardner wrote a fair amount, publishing poetry and essays, frequently lectured on island, and continued working in schools. Then, in 1865, soon after the end of the Civil War, Gardner, then fifty years old, left the north east for Charlottesville, Virginia where she had been assigned to start a school for freedmen by Freedman’s Bureau. She worked there, training teachers and teaching freedmen and women of all ages, for over ten years. At the end of her tenure as a teacher Gardner retired to Nantucket where she continued to lecture, often at the Atheneum, and to fight for the rights of women and for the Temperance cause until passing at eighty-five [9].

Though she moved from the island at the age of eleven, radical abolitionist and feminist, Lucretia Mott, was greatly influenced by Nantucket culture and always considered herself an islander. Mott cited the independence allotted women on Nantucket as one of the reasons that she so fervently pursued women’s rights: she believed that all women should have such freedom.

In a letter to Elizabeth Cady Stanton she writes that on Nantucket: “Women have long been regarded as the stronger part. This is owing in some measure to so many of the men being away at sea. During the absence of their husbands, Nantucket woman have been compelled to transact business, often going to Boston to procure supplies of goods –exchanging for oil, candles, whalebone — &. c — This has made them adept in trade. They have kept their own accounts, & indeed acted the part of men.  Then education & intellectual culture have been for years equal for girls & boys so that their women are prepared to be companions of man in every sense — and their social circles are never divided. Successive generations of this kind of mental exercise have improved the form of the head, and the intellectual portion predominates[10].”

Mott continued to travel to Nantucket into her seventies to visit her many relations in the community that she had always loved.

Though she did visit often, there’s not much record of Mrs. Mott lecturing on Nantucket. It would seem that she gave a sermon at the Unitarian Church in 1847 and didn’t speak on-island again until 1854. By the time Lucretia Mott came to speak at the Atheneum, she was already very well known throughout the country. She’d already led a full life, having born eleven children, become a Quaker minister, lectured across the country, been a contributing member of the Anti-Slavery Society, traveled to abolitionist conferences in Great Britain, and organized the Seneca Falls Convention. Nevertheless, the article that reported her speech at the Atheneum merely notes: “On Friday the Hall was well filled and Mrs. Lucretia Mott, of Philadelphia, gave a familiar lecture, in her own peculiar and pleasing style, of almost one hour and a half’s duration[11].”  Over one hundred and fifty years later, we can only guess at what her speech may have covered.

https://nantucketatheneum.org/wp-content/uploads/Maria-Mitchell.jpg 788 800 academic https://nantucketatheneum.org/wp-content/uploads/LOGO-final.png academic2017-11-08 20:00:462018-01-17 18:36:49Women in Atheneum History
Please support your public library.
WE RELY ON THE SUPPORT OF OUR DONORS FOR 75% OF OUR OPERATING BUDGET.
SUPPORT OUR LIBRARY
Scroll to top