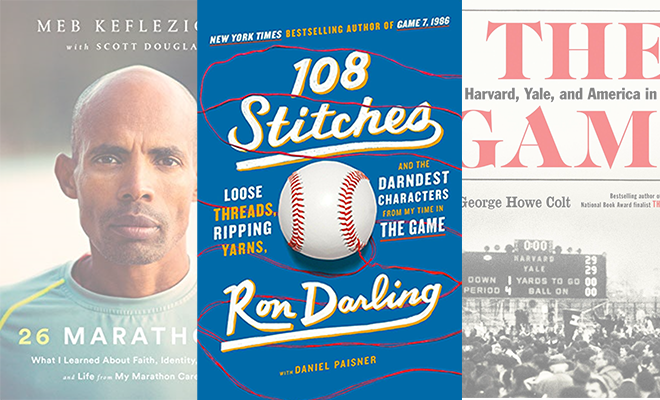 It’s good to be a Boston sports fan. First, there were the Patriot’s Day Weekend playoff wins for both the Celtics and the Bruins. Then, on Monday, fans finally got to go outside after a long winter to cheer on Boston Marathon runners and queue up for Red Sox opening day at Fenway Park.

And in the middle of this confluence of winter and spring sports comes new books to help us celebrate the best of team efforts, offer reflections, and examine the cost of choosing a career in sports.

Sportscaster and baseball player Ron Darling’s book 108 Stitches: Loose Threads, Ripping Yarns, and the Darndest Characters from My Time in the Game (April 2, St. Martin’s Press) is a collection of wild, wise, and wistful stories reflecting the full arc of a life in and around our national pastime. Through relationships with baseball legends on and off the field, like Yale coach Smoky Joe Wood, Willie Mays, Bart Giamatti, Tom Seaver and Mickey Mantle, Darling’s reminiscences reach all the way back to Babe Ruth and other turn-of-the-century greats.

New York Times baseball columnist Tyler Kepner breaks the history of the sport down into 10 pitches in K: A History of Baseball (April 2, Knopf Doubleday Publishing Group). He traces the colorful stories and fascinating folklore behind the 10 major pitches with each chapter highlighting a different pitch. Kepner shares insights from many of the best pitchers in baseball history including 22 Hall of Famers.

George Howe Colt delves into the history of an epic Harvard-Yale Football match in The Game: Harvard, Yale, And America in 1968 (October 2018, Scribner). The two teams played their final game of the season on November 23, 1968, which ended with a score of 29-29. This is the story of an iconic American year as seen through the young men who lived it and were changed by it.

With eight straight trips to the NBA Finals, James has proven himself one of the greatest basketball players of all time and also become a global brand and businessman.  LEBRON, INC tells the story of James’s journey to becoming a billionaire sports icon and shows how he changed the way most elite athletes manage their careers.

Often called America’s best sports writer, Wright Thompson investigates what it takes to pursue a career in sports in his book The Cost of Dreams: Sports Stories And Other Serious Business (April 2, Penguin Publishing Group). A gifted writer, Wright’s profiles of some of the biggest names in sports, both past and present — Michael Jordan, Tiger Woods, Ted Williams, and Bear Bryant – with style and smart storytelling and “cuts through the mythology with a scalpel,” said The National Book Review.

Four time Olympic runner Meb Keflezighi offers his insights on his sport in 26 Marathons: What I learned About Faith, Identity, Running and Life From My Marathon Career (March 19, Potter/Ten Speed/Harmony/Rodale). Keflezighi is the first person in history to win both the Boston and New York City marathons as well as an Olympic marathon medal. He shows runners of all levels how to apply the lessons he’s learned to their own running and lives.

And, in case you missed it, Tiger Woods had a great Patriot’s Day weekend too – he won his fifth Masters competition. Earlier this month, Simon & Schuster issued the paperback version of Tiger Woods, a comprehensive biography by Jeff Benedict and Armen Keteyian. A new work by David Sowell offers a history of the venerable golf tournament in The Masters: A Hole-by-Hole History of America’s Golf Classic (March 1, UNP Nebraska).

https://nantucketatheneum.org/wp-content/uploads/sports.png 400 660 Amy Jenness https://nantucketatheneum.org/wp-content/uploads/LOGO-final.png Amy Jenness2019-04-16 21:14:432019-04-16 21:37:59New Sports Books To Celebrate the Playoffs and Spring Baseball
Please support your public library.
WE RELY ON THE SUPPORT OF OUR DONORS FOR 75% OF OUR OPERATING BUDGET.
SUPPORT OUR LIBRARY
Scroll to top