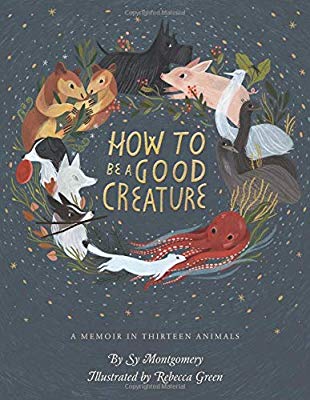 The natural world is a vast and awe-inspiring topic. Every so often a book will come along and capture the perfect narrative of flora and fauna. These new titles explain discoveries about nature, science, and how it is all deeply interconnected.

The Secret Wisdom of Nature is the third in the Mysteries of Nature trilogy by Peter Wohlleben. This final chapter in his series focuses on ecosystems and how all life communicates. Wohlleben has studied plants and animals for decades with special attention to the way they interact within their own networks of language. His writing uncovers how delicate the balance is within and between ecosystems on our planet. Wohlleben also warns about the destruction of nature by humans and what we can do to preserve our world.

Sy Montgomery is an award-winning author and naturalist who has written dozens of books about animals from around the world. In her newest release, How to Be a Good Creature, Montgomery focuses on the pets and animals that made her a better person. Her memoir tells the story of her life through the creatures she encounters; from a childhood Scottish terrier named Molly to a group of endangered tree kangaroos in the rainforest. Every animal changed her life in a significant way and taught her important lessons about love, loss, and purpose. The illustrations by Rebecca Green are equally as charming as the writing within.

Primate researcher Frans de Waal writes about the deeply emotional aspect of animal behavior through a remarkable chimpanzee in his book Mama’s Last Hug. Mama was the matriarch of a large chimpanzee family at a zoo in the Netherlands who lived to be almost sixty years old. In her final moments, though weak and tired, her face lights up when she is reunited with an old friend. In a now-viral video, Mama embraces a biology professor she had known for over forty years by pulling him close and patting his head. It was an emotional goodbye previously only attributed to human interactions. De Waal uses Mama and other extraordinary creatures to deconstruct the myths and stereotypes placed on the natural world to understand the importance of emotions.

Elizabeth Kelly is a reference librarian at the Nantucket Atheneum.

https://nantucketatheneum.org/wp-content/uploads/howtobeagoodcreature.jpg 400 310 Amy Jenness https://nantucketatheneum.org/wp-content/uploads/LOGO-final.png Amy Jenness2019-05-20 15:16:472019-05-20 15:16:47New In Nature
Please support your public library.
WE RELY ON THE SUPPORT OF OUR DONORS FOR 75% OF OUR OPERATING BUDGET.
SUPPORT OUR LIBRARY
Scroll to top