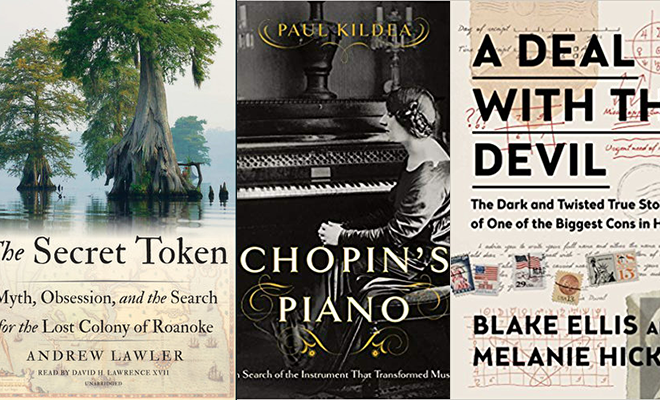 The Secret Token: myth, obsession, and the search for the lost colony of Roanoke (Andrew Lawler)

In 1587, a ship of 115 English men, women, and children landed in modern-day North Carolina to establish the first successful British colony. John White, leader of the voyage, returned to England to acquire new members and supplies. His trip was intended to be brief but war with Spain made it impossible to sail back to the colony until 1590, a full three years later.

Upon his arrival the remaining Roanoke inhabitants were nowhere to be found, including White’s wife and daughter. There was no evidence of foul play and the only clue was the word “Croatoan” carved into a fence post, the name of a local Native American tribe. No one knows what happened to the Roanoke colony but author Andrew Lawler attempts to deconstruct the mystery in his new book. His work focuses on the social and archeological history of the Roanoke colony as well as the cult obsession it has inspired.

Chopin’s Piano: in search of the Instrument that transformed music  (Paul Kildea)

Polish virtuoso Frédéric Chopin and his partner traveled from France to a monastery in Majorca during the winter of 1938. When the piano he planned to use during their vacation did not arrive quickly enough the famed composer resorted to practicing on a small pianette built by a local craftsman. Author Paul Kildea writes in his newest book about how this one instrument would become an integral part of musical history.

Not only was the small piano used to complete Chopin’s Preludes, arguably his most famous work, but it was later stolen by the Nazis during the infamous art plunder of World War II. Kildea shares the intertwined stories of Chopin’s legacy and fellow Polish pianist, Wanda Landowska, who inadvertently spared Chopin’s famed instrument from obscurity. The book is an inspiring look at one of the world’s most beloved musical talents.

A Deal with the Devil: the dark and twisted true story of one of the biggest cons in history  (Blake Ellis and Melanie Hicken)

While investigating financial crimes for CNN, reporters Blake Ellis and Melanie Hicken happened upon a story about a French psychic named Maria Duval. The team began to connect the dots between multiple reports of elderly and vulnerable people being scammed into sending large sums of money to Duval with the promise of good health and fortune in return. Some of the victims sent their life savings and cashed out entire retirement funds.

This type of financial crime is not uncommon but the amount of money that had been swindled, over $200 million dollars, was astounding. At least 1.4 Americans were victims of the scam over the course of 20 years including the sick and disabled who trusted Duval’s promises of curing their ailments or winning the lottery. Ellis and Hicken’s book delves into the dark reality of the Duval con in attempt to uncover the truth and seek justice for the victims. It reveals a much larger and more sinister fraud than anyone could have imagined.

Elizabeth Kelly is a reference librarian at he Nantucket Atheneum.

https://nantucketatheneum.org/wp-content/uploads/Mystery.png 400 660 Amy Jenness https://nantucketatheneum.org/wp-content/uploads/LOGO-final.png Amy Jenness2018-10-10 16:05:582018-10-10 17:19:55What Happened? True Mysteries To Investigate
Please support your public library.
WE RELY ON THE SUPPORT OF OUR DONORS FOR 75% OF OUR OPERATING BUDGET.
SUPPORT OUR LIBRARY
Scroll to top