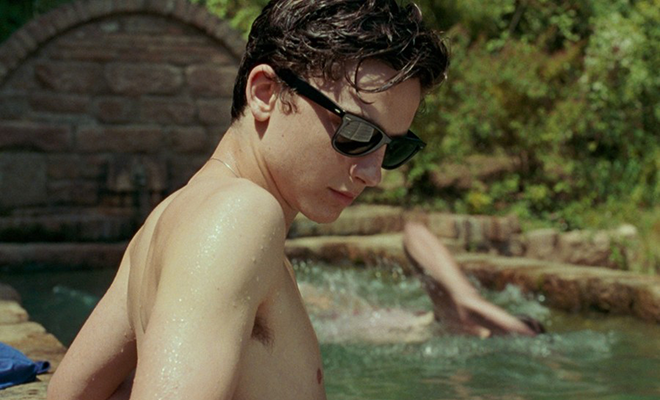 Italian film maker Luca Guadagnino’s works are the perfect antidote to the grey days of winter. They’re impeccably styled and shot in enviable locations like the sun-drenched island of Pantelleria in the Mediterranean Sea or an opulent Villa Necchi Campiglio in the heart of Milan.

His previous films include the acclaimed I Am Love (2009) and A Bigger Splash (2015). Guadagnino’s latest film, Call Me By Your Name, is an adaptation of Andre Aciman’s novel by James Ivory. Set during the summer of 1983, the film is a saga of first love and sexual awakening. It was nominated for four Academy Awards, won the Academy Award for best adapted screenplay.

Academy Award Winner Call Me By Your Name

The setting of Call Me By Your Name is an integral character: Northern Italy in the summer. It’s a kind of Eden, lush and blooming. The film was shot in Crema, Italy which happens to be Guadagnino hometown. One would be hard pressed to find a more idyllic location for a coming of age romance. (The villa where much of the film takes place was recently featured in Architectural Digest) Guadagnino has an impeccable eye for detail and extensive research was done; everything from the swimsuits to the radios perfectly fits the eighties time period.

Inspired by directors Maurice Pialat and Bernardo Bertolucci, masters of humanistic filmmaking, Call Me By Your Name has loftier ambitions than most Hollywood romances. “…he {Bertolucci} believes that the camera is a tool through which the director investigates the deepest and most hidden recesses of the actor’s identity”, Guadagnino said in an interview. Timothée Chalamet’s performance in the film garnered him an Academy Award nomination for best actor at 22-years-old, making him the youngest nominee in nearly eighty years. (Mickey Rooney was nominated in 1939 for Babes in Arms) Chalamet’s portrayal of Elio Perlman is radiant, raw and not to be missed.

Call Me By Your Name is available on DVD and Blu-ray at the Atheneum.

I’ve worked as a volunteer for the library for 10 years. I have never found a more pleasant, dedicated and professional group of people. The Atheneum and its staff are a treasure for this town.

- Jane Duffy
Please support your public library.
WE RELY ON THE SUPPORT OF OUR DONORS FOR 75% OF OUR OPERATING BUDGET.
GIVE NOW
Scroll to top