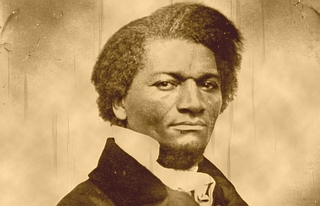 On August 10th 1841, an ordinary steamboat made its ritual passage across the sound from New Bedford to Nantucket Harbor. Upon it, however, sailed an extraordinary man—one who would use the power of his own experiences to fight the institution of slavery. His name was Frederick Douglass.

Born a slave in Tuckahoe, Maryland, Douglass’ early life was stifled by servitude. He was raised by his grandparents in a wood and clay cabin on the plantation of Colonel Edward Lloyd. His mother, Harriet Bailey, was sold to a neighboring farm when he was an infant and died when he was very young. Of her, Douglass has little memory. “I do not recollect seeing my mother by the light of day,” he writes, chronicling in his first autobiography how Bailey would travel twelve miles by foot to visit him after dark. These secret engagements were precious, and dangerous, for both mother and son. The identity of his father is unknown but widely speculated, even by Douglass himself, to have been a previous master.

The life of a slave was tormented by fear and hunger. In his most desperate moments, Douglass would long for the tablecloths to be shaken out so he could catch the crumbs and bones that had been intended for the cats. He witnessed the violent wrath of his masters, and their overseers, for offenses as minute as tardiness and physical exhaustion. In an unexpected twist of fate he was chosen to work for Hugh Auld, a ship carpenter in Baltimore. It was there he observed vast differences between city and rural slaves; markedly, the quality of his accommodations. Until the move to Baltimore, Douglass had never owned a pair of his own trousers.

Douglass viewed his tenure in Baltimore as a period of enlightenment. Most notably, it was where he learned to read and write. Sophia, Auld’s wife, was his first tutor. Unfortunately, her husband forbade the illegal lessons and suggested an education would impede Douglass’ ability to remain fit as a slave—a concept that stayed with him for the rest of his life. “These words sank deep into my heart, stirred up sentiments within that lay slumbering, and called into existence an entirely new train of thought.” He decided to become his own teacher by hiding books and befriending local boys to learn new words. These informal lessons were the foundation of a lifelong quest for knowledge and, with it, a quiet freedom.

Douglass lived in Baltimore for seven years before he was sold back to the plantation. The experience was an unfathomable period of violence and abuse. He writes, “I was broken in body, soul, and spirit. My natural elasticity was crushed, my intellect languished, the disposition to read departed, the cheerful spark that lingered about my eye died; and behold a man transformed into a brute!” He had left the farm as a hopeful boy and returned a young man to a devastating reality.

Douglass’ horrifying treatment paralleled the fate of millions of slaves around the country and the globe. In 1833, the same year Douglass was sent back to the Maryland farm, the United Kingdom passed the Antislavery Act to abolish slavery within the British Empire. By comparison, abolition of slavery in the United States would not occur until 1865. For Douglass and thousands of other slaves, thirty years and an ocean would separate them from the legal right to be recognized as human beings.

The Road to Freedom

For a second time, Douglass was sent to the Auld’s in Baltimore. He took up caulking work in the shipyards where he met a laundress, Anna Murray, who had been born free. They bonded over the desire to escape the south and plotted an elaborate scheme together. Wearing a sailor’s uniform that Anna had sewn and with fraudulent “seaman’s protection” papers in his pocket, Douglass boarded a departing train. It was a journey wrought with risk. He met familiar faces along the way—all who could have easily betrayed his cover. The northern corridor was policed by bounty hunters on the lookout for their reward. Fortunately, he was able to elude capture and arrived safely in New York during the fall of 1838.

Anna followed shortly after and they were married the same year. The couple was assisted by David Ruggles, leader of the New York Vigilance Committee, who encouraged them to move to New Bedford, Massachusetts so Douglass could find more opportunities in ship work. They managed to scrounge up enough money with the hopes of settling into a new life together. “I was now my own master,” Douglass wrote, happy to have the hard but satisfying employment in New England. In 1839 he became a licensed preacher and, for the first time, was made fully aware of the abolitionist cause. By attending antislavery meetings held by the local African-American community, he would ultimately lead the conversation.

William C. Coffin, a Nantucket banker, heard Douglass speak at one of the assemblies in New Bedford and, overwhelmed by the presentation, invited him to attend the island’s first Anti-Slavery Convention in 1841. He accepted, unaware that the event would change his life. After meeting Douglass at the ferry dock Coffin urged him to speak at the forum being held in the Great Hall of the Nantucket Atheneum. There is no official transcript of the speech, only a brief description of the event in his own words from “Narrative of the Life of Frederick Douglass”:

It was a severe cross, and I took it up reluctantly. The truth was, I felt myself a slave, and the idea of speaking to white people weighed me down. I spoke but a few moments, when I felt a degree of freedom, and said what I desired with considerable ease.

While humble in evaluating his own performance, Douglass’ discourse was met with tangible excitement. The room erupted with cheers. Later accounts of the evening would describe his speech as an eloquent, heartfelt monologue that illuminated the raw and vile nature of slavery. It was the first time the audience had ever heard the truth about the slave trade from someone who had survived it. He was only twenty-three years old at the time.

Nantucket is where Douglass first met William Lloyd Garrison, a religious activist, publisher, and founder of the American Antislavery Society. After hearing Douglass’ speech Garrison invited him to share his story at future abolitionist events. It was not an easy decision. By law, Douglass was still considered a fugitive slave and public appearances increased the threat of capture. Defiantly, he spoke as a lecturer for the Antislavery Society for many years and later supported the women’s suffrage movement in a similar fashion. A single speech had launched a former slave into the global fight for equality.

A Legacy to Behold

Douglass quickly became a household name. He had already written his first autobiography in 1845, an instant bestseller, and would go on to publish The North Star abolitionist newspaper. In February of 1846, Douglass became a free man. While touring Ireland and the United Kingdom, sharing his story and eluding stateside capture, his British supporters raised enough money to pay the Auld estate for his legal freedom. To commemorate this sovereign victory he adopted the date as his official birthday.

Celebrated for his commitment to humanitarian efforts, Douglass was also an ethical scholar, politician, and avid fan of photography. Hundreds of essays on education and technology were penned by his hand. He advised Abraham Lincoln during the Civil War, served as counsel-general to the Republic of Haiti, and was nominated as a presidential elector for the state of New York. In 1877, under Rutherford B. Hayes, he was the first African-American to be appointed a U.S. Marshal. He also sat for 160 distinct portrait poses—more than any other 19th century American figure. One of which, taken at the very end of his life, depicts him with a smile.

Frederick Douglass died on of a heart attack on February 20, 1895. His funeral was held in Washington D.C. and attended thousands of mourners. Delegations from New York, Annapolis, Baltimore, and Philadelphia lined the streets to watch the procession. Speakers included Susan B. Anthony and May Wright Sewall. He was laid to rest in Mount Hope Cemetery in Rochester, NY where he had previously lived for twenty-five years. Though born into a chained obscurity, Douglass would depart this world as a champion for humanity.

Elizabeth Kelly is a Reference Librarian at the Nantucket Atheneum and year-round resident. She teaches workshops at the library on technology, database research, and bookbinding.

https://nantucketatheneum.org/wp-content/uploads/FDouglas.jpg 206 320 academic https://nantucketatheneum.org/wp-content/uploads/LOGO-final.png academic2017-11-08 20:26:122018-01-25 23:16:53A Degree of Freedom: The Life and Legacy of Frederick Douglass
Please support your public library.
WE RELY ON THE SUPPORT OF OUR DONORS FOR 75% OF OUR OPERATING BUDGET.
SUPPORT OUR LIBRARY
Scroll to top